21 February: A disappointingly small group heard about two successful projects in which Franki had been involved. Firstly, Byron Field, Franki’s Trenchless Manager, all the way from Durban told us about conquering the fine sand, cobbles and boulders that needed to be tunnelled through in linking parts of the Paarl Bulk Sewer line under the N1 and Arboretum Road and along the N1 opposite Boschenmeer.

Other problems to be overcome were the high water table, multiple services and the proximity of Boschenmeer’s boundary wall, and later on the environmentally acceptable disposal of certain materials. Considered were re-routing of the line, opencast work, micro-tunnelling (horizontal drilling and then reaming out with jetting) and pipe-jacking. The first three were ruled out through policy decisions or impossibility in the materials encountered, and the pipe-jacking solution was only made possible through the innovative approach of Franki. To counteract the inrushing groundwater and collapsing sand and cobbles, they jetted a weak cement+additive down to the line of the tunnel, forming a series of contiguous columns of 1,8m to 2m diameter, which resulted in a weak conglomerate through which they could then jack in (almost) dry and stable conditions. Under the N1 the grouted columns had to be raked, leading to much “deeper” drilling, and a power line led to a low-height rig having to be used. They found some-one willing to accept the tailings coming out of their drilling/jetting operation and deal with it appropriately (actually using the weak con-crete)…. Top marks Franki. If you need this technology for your sand and boulders: Byron.field@franki.com 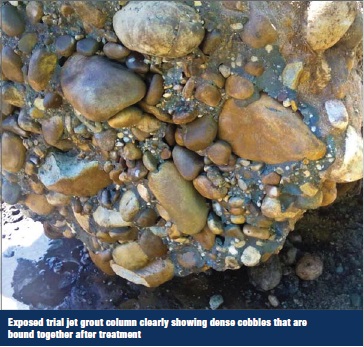 Anton Stoll then told us of the dynamic compaction used to secure the foundations for a new tank farm for Burgan Cape Terminals in the Port of Cape Town. Complications included vibration-sensitive structures, masts, pipelines and the adjacent existing tank farm, whilst the 12m to 18m of fill in the quay on which the tanks were to stand consisted of almost anything. Piling and vibro-replacement were not suitable for spread loads and dynamic compaction was the answer. 15,5 tons dropped from 20m formed deep craters, followed by 12,6 tons from 15m in various shapes, with the top 500mm being roller compacted sounds simple, but with very tight tolerances (distortion 1:800 and 1:1200, the differential between the settlement of the centre and circumference of the tank a maximum of 50mm, and existing neighbouring tanks to not settle by more than 8mm set some challenges. A 3m deep battered vibration cut-off trench was installed. No adverse effects! Drill testing of compaction helped not at all, as they inevitably drilled to refusal, so plate load testing and “continuous surface wave” testing (adaptation of seismic exploration) were used. Franki would be happy to replicate their effort: anton.stoll@franki.com 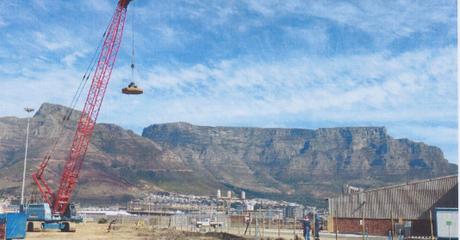